After re-assembling the motherboard inside the cassis and hooking up the power supply, it was time to check the power rails and make sure everything was working.

I threw the switch and the power supply came to life. I probed the power supply voltages as they arrived at the motherboard and everything looked fine. However, when I checked for power at the backplane sockets themselves, I discovered that the -18v rail was missing from about half of the sockets.

Because the rail was there for half the sockets and not there for the other sockets, it must be a fault on the motherboard.  Several dozen screws later (actually, only 8, but it feels like more), I pulled the motherboard out and did a visual inspection of the underside traces. 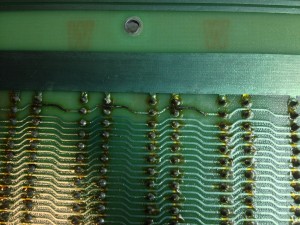 I’m not sure how I missed it when I was cleaning the board, but this time it was obvious – a burned out trace. There’s a serious design flaw in the NorthStar Horizon – the power rails from the linear power supply go straight to the backplane without any in-line fuses. Later S-100 machines have fuses on the backplane which would have protected the motherboard. If this was my machine 30 years ago, I probably would have retrofitted some fuses, but this machine has gone from a functional tool to a museum curiosity, so now isn’t the time to start making modifications. 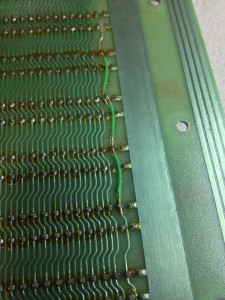 I identified three areas in the trace that had burned through, and carefully scraped away the destroyed trace. The trace winds its way between connector pins, so I used a small piece of insulated wire to re-connect the trace.

A quick test with my multimeter made sure that the trace was reconnected and there weren’t any shorts to adjacent pins. I reinstalled the motherboard with it’s several dozen screws, and re-connected the power supply. This time, all the voltage rails were now visible at all the connectors.

I am now ready to start plugging in boards and getting the old beast to show some signs of life.