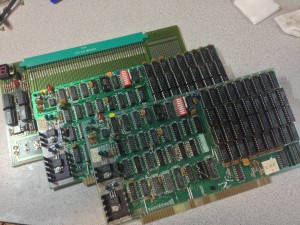 As I mentioned in my last update, I was without any NorthStar RAM for this machine. I spent several hours trying to get the Dynabyte 64k board running, but didn’t get much success. Unable to find any documentation for the board online, I had to try to reverse engineer the bank switching scheme used. I managed to figure it out, and was able to use my monitor to switch banks on and off, I was unable to get the RAM to actually work. I could read just fine, but writing always resulted in the value FF being deposited.

I was starting to think that this might be the end of my Retrochallenge (what use is a machine with no RAM?), so I put out a plea looking for S100 RAM boards in a couple of retro mailing lists. I received a couple of offers go help, and incredibly I was able to locate not one but TWO NorthStar memory boards right here in my small home town of Kelowna (population approx. 120,000). He even threw in an S100 extender board! 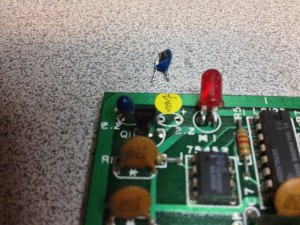 These memory boards – part number RAM-32-A – were much better to work with because of the ready availability of documentation. The first steps were familiar to me now – test all of the tantalum capacitors for shorts. One of the boards had a tantalum that had already experienced a catastrophic failure – half of it was missing. I dropped in a replacement, then tested the power rails by bringing each one up on a current-limited supply. Both boards passed these tests, so now it was time to test each board in the Horizon. 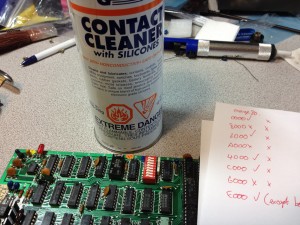 One board failed completely – the red LED didn’t even light up. However, the second board showed very encouraging signs of life. Using the documentation to enable each 8k bank one at a time, I was able to deduce that all banks were working, however not all banks worked in both bank locations (each bank can appear in one of two locations, or be switched off completely). I suspected the DIP switches as the likely culprit, so I tested the switches with my meter – yup, several switches had a very high resistance or complete open circuit. A quick spray of contact cleaner and some vigorous switching should clean those up. I could only locate my lubricated contact cleaner, which is not ideal for this application (it’s more useful for things like relay contacts), but because my regular contact cleaner was MIA, this would have to do. 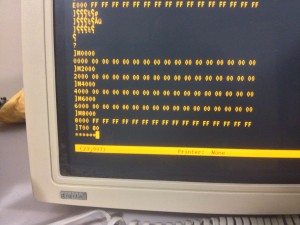 Sure enough, this fixed it! 32k of beautiful error-free RAM. My monitor ROM has a memory testing function, so I left this running for several hours, and not a single memory fault! I will save the debugging of the second board until later, but for now I have a respectable 32k to play with. I think the next step is to get the floppy drives going, and eventually get to the point of writing a boot disk.