I came across a very interesting read today. Laukosargas Svarog has used the framework provided by Linden labs’ Second Life and built what appears to be a true ecosystem. She has weather, birth and death of plants, animal polination. It’s a testament both to the flexibility that Linden has built in to their system, as well as the creative imaginations of a single individual. I wonder what would happen if her virtual plants were allowed to ‘escape’ her garden and colonize the entire world…?

I recently spent a whole bunch of time banging my head against a wall trying to get Fedora Core 5 installed on some Compaq Proliant DL360 machines I have. Core 4 installs fine, but Core 5 has a problem with the hardware RAID on these machines. The installer fails to identify the driver (cpqarray) successfully, and if selected manually, it finds it but fails to find any hard drives attached.

After quite a bit of searching, I found a posting at the Fedora Forum describing the fix. The trick is to boot the installer with:

Once the installer fails to find the hard drive, select ‘cpqarray’ and ‘sym53c8xx’ drivers. After that, the install will complete successfully. All credit to this fix goes to ‘Mesu’ from Fedora Forums.

I had heard a rumor that the Bell 9200 PVR used a Linux kernel. I haven’t been able to confirm that rumor. However, I have found confirmation that the Dish 942 is Linux based. I believe that the 942 and 9200 are basically the same hardware.

Dish has done the right thing and released portions of their source code because they’re using software that is licensed under the GPL. Their disclosure, although difficult to find, is here:

I’m going to give Bell a call and see if they will release the source code to me as mandated in the GPL. I’ll let you know how it goes!

I called Bell after posting this entry, and was passed on to Sharaz (LXY 6009835), a second level technician who seemed to understand the concept of the GPL. He was unable to locate any reference to it on the Bell site or in their Intranet. He assured me that he would look into it and call me back.

Two days later, I haven’t heard from Sharaz, so I called back. This time I got Mark (LJZ – he refused to provide his employee number. I’m not sure of Bell’s policy, but this is the first time that I have been refused this information from a Bell employee). Mark seemed to take an interest in my question. He sounded like a bit of a Linux nut himself. Hi appeared to be using an Instant Message client to talk to the development staff, but the response he got back was “What’s a GPL?”. Based on that answer, he decided that an email to the corporate side of things might be in order. He’s assured me that he will get back to me by Monday with a status report.

If I don’t hear back on Monday, I’m going to take the GNU project’s advice and advise the copyright holders of this apparent voilation.

Our company has just gone through a merger with a US company (we’re Canadaian). So far, it’s looking like the majority of the combined company’s IT work is being done out of my office. The other day, I just received a document from the US office with some notes regarding an upgrade to their website. I’m getting rather used to someone handing me some scribbled notes on a piece of paper and expecting me to interpret those notes and produce a working piece of software. I wasn’t quite expecing these notes, however. The gentleman had literally taken the time to take his hand-scribbled note and scan it in, then convert it to a PDF, then email it to me. It’s completely unintelligible. 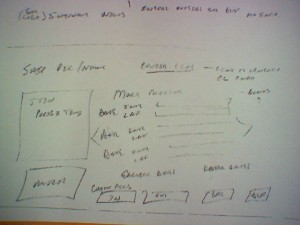 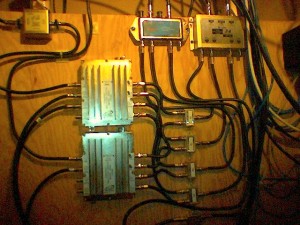