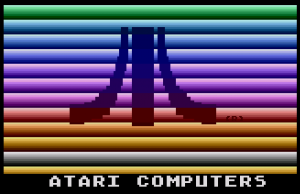 It’s finished. I accomplished what I set out to do, which was to take the code that I had submitted to Page 6 Magazine so many years ago, and answer the challenges that I had posed back then.

Now, Colourflow is frequency-independent (works with PAL and NTSC), and actually runs as a display list interrupt, so normal code (such as a BASIC program) can run and do things such as scan for keypresses, etc.

I even had some time to throw in a couple of additional features. The BASIC wrapper will scan for keypresses, and POKE values into the machine code to adjust the scrolling speed, or even change direction of the scrolling. The keys recognized are:

The speed change is done by changing a delay variable. The direction change is rather sneakily done by POKEing a DEX or INX command into memory to change the direction of the loop – BASIC modifying machine code on the fly!

This was a fairly basic Retrochallenge, but I had fun revisiting something that I had done when I was a third of my current age. It was fun to program within the limitations of the original hardware, although admittedly I did use emulation for times when I wasn’t near the hardware (such as at work). 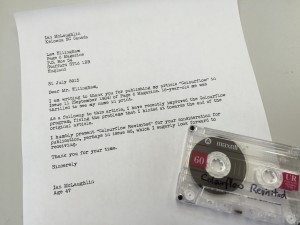 If you’d like to look at the code, an ATR image is available – just open up in your favourite emulator. Or, if you’re adventurous, why not pull out your Atari hardware and run it from a real floppy disk.

My original submission to Page 6 Magazine was on cassette, so with tongue firmly in cheek, I thought I’d mock up a submission letter to the magazine with my new code.

Sadly, Page 6 Magazine stopped publication in 1998 after 85 issues. However, the retro computing hobby is very much alive, with what must be a record number of entrants into the Retrochallenge. I’ve had immense pleasure reading and following all of the entries.

It’s the middle of the month, so time for a Retrochallenge update. I’ll admit that I got a bit distracted by the arrival of a beautiful Jupiter Ace replica kit, so I’ve spent a bit of time assembling it, but I’ve still managed to put in some time with my main Retrochallenge goal.

The biggest surprise was how rusty my 6502 is. I thought it would be like riding a bike, but it’s been a little rough. But some perseverance, and it’s starting to come back.

The original Colourflow doesn’t use any interrupts, but rather just locks up the processor in a tight timing loop. This means that nothing else can function – for example scanning for keypresses, etc. It’s a quirk of execution timing that makes the nice slow scrolling pattern. Because PAL and NTSC timing is different, the pattern doesn’t work on NTSC.

In order to get NTSC working, as well as have cycles to monitor key presses, etc, I’m going to have to go with an interrupt-driven routine. After using De Re Atari to brush up on my video interrupt options, I’ve decided to go with a display list interrupt (DLI) that will fire once per screen. The intention is to increment my starting colour once every few screens, which will give me the effect of scrolling the display.

So far, I’ve got a nice static display, just to test out the interrupts, and here’s the result: 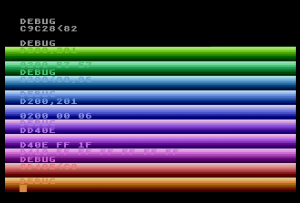 Here’s the code used to create it: 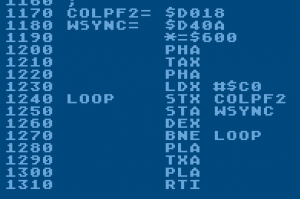 This code is called TEST1.ASM on the disk image, if you’d like to try it yourself. The interrupt vector will eventually get loaded via BASIC, but for now, here’s how you can set the vector while you’re in the Assembler Editor.

There we go. We’re half way through the month, and I’m about half way done.

After (re)discovering the semicolon bug in Atari BASIC revision A, I thought I’d spend a bit of time trying to find out exactly why BASIC was exhibiting this behaviour. In order to do this, I had to re-learn how BASIC stores programs in memory.

Atari BASIC uses tokenization to reduce the memory footprint and increase the execution speed of programs. Tokenization replaces keyword strings (such as PRINT) with single-character tokens (0x20). Ultimately, this bug is caused by the tokenization process and incorrect bounds checking.

First, let’s look at a simple PRINT statement, and how Atari BASIC tokenizes it. You may want to reference De Re Atari which has a good explanation of the tokenizing process, as well as a token table.

Our first example print statement has a 2-byte string constant “HI”, followed by the token for end-of-line. 0x20 is the token for PRINT. llen and slen are the line length and statement length.

Our second example adds a semicolon to the end of line. The normal behaviour for semicolon is to suppress the automatic carriage return. Note that the string is still 2 bytes long, followed by the token for the semicolon (0x15).

Now that we’ve seen how the different lines are tokenized, let’s look at the BASIC source code. We need to look at the XPRINT function, which begins at 0xB3B6.

I know that’s a lot of code, but let’s follow the bouncing ball. The first key part happens at address 0xB3C8 – we look for an eol token (0x16). If we find one, we branch to XPEOL (0xB446). What’s the first thing we do at the end of line? We rewind one byte (DEY – decrement Y), and see if it’s the token for semicolon (0x15). If it is, we skip printing a carriage return.

Looking at the code, similar behaviour will happen with the value 0x12, which is the token for a comma.

This bug has been fixed in revision C BASIC, but I’m not aware of commented source code being available for revision C.

In order answer my challenge from 32 years ago, I need to get the original Colourflow code into an Atari. My original cassette tapes are long-gone, so all that’s left is the code listing as printed in Page 6 magazine. It’s only 34 lines of BASIC, but there’s a bit of a problem. The code displays the Atari fuji logo created with character graphics, but it’s difficult to figure out the individual characters from the listing.

Never mind. I’ll use the same technique that 15-year-old me used all those years ago – I’ll steal it. I ‘borrowed’ the fuji logo from the cassette loader portion of Atari’s SCRAM program (a fun little nuclear power plant disaster simulator).

I’m trying to address this challenge with minimal use of emulators, but I don’t have a working 410 cassette player (belt rot), so I used Atari800MacX to grab the loader from the cassette and transfer it to a floppy. Some quick edits, and typing in the rest of the code, and I’ve re-created my original BASIC program. Here’s an ATR image of a disk with the BASIC code as well as the SCRAM loader, if you’d like to play along at home.

Running the code an an NTSC machine doesn’t give me the proper display because of the difference in PAL and NTSC timing. However, if I boot up Atari800MacX with the PAL ROMs and set it to PAL timing, I actually get the original Colourflow display! So, by the end of the month, I need to re-create this in a region-independent version, along with keyboard interrupt, and who-knows-what-else functionality.

But what’s this BASIC bug I mentioned? Well, if you look at the screenshot of the SCRAM loader that’s posted on AtariMania, you’ll notice that there’s a blank line running through the middle of the fuji logo. What’s that all about? If I run SCRAM on my 800 I don’t see this. But on a 130XE the gap is there. Looking at the SCRAM loader source code, it looks obvious – check out line 50. What’s that extra PRINT at the end?

It turns out that if you remove this PRINT statement, the code works correctly on a 130XE, but breaks on an 800 – the output of line 50 and 55 get concatenated just like if there was a semicolon at the end of line 50.

The problem is caused by the character at the end of line 50. This is character 0x15 or CHR$(21). It turns out that any PRINT statement that ends in this character will act as if there is a semicolon at the end of the line (i.e. surprise the carriage return). Atari was obviously aware of the problem, because they coded the SCRAM loader with the extra PRINT statement to force the carriage return.

Before I dig in to the cause of this, was Atari’s workaround the best way to do this? Obviously not, because they broke forward compatibility in later versions of BASIC. In hindsight, perhaps putting an extra space at the end of the PRINT statement would fix the problem without breaking once the bug was patched. Maybe Atari didn’t expect the bug to be patched?

Is this a known BASIC bug? I looked for an official bug list, but couldn’t find one. There are a few famous Atari BASIC bugs, some of which were listed in the July 1986 issue of Compute! magazine.

Looking at the source code for Atari BASIC, I’ve found the cause of the bug, and in a later posting, I’ll outline what I’ve discovered. If you can’t wait, the big clue is in the ASCII value for the suspect character, and the BASIC token table.

Day 1 for RetroChallenge 2015/07 is over, and I’m having fun. Spending half an hour typing in source code from a magazine really took me back to the old days of software distribution (and also reinforced my memory of just how bad the 130XE keyboard was).