As I blogged earlier, there are continuing problems with the Bell ExpressVu 9200 PVR. This morning, I woke up to the only problem on the growing list that I had not personally experienced yet. Error 0521. It means that the hard drive is corrupted. I lost all of my recorded shows (which, because of the stuttering problem, were almost unwatchable) and all of my event timers (which, because of the lack of name-based recording, were at the mercy of the networks shuffling around show times). I called Bell, and spent several minutes re-explaining all of the issues with the 9200 PVR, to which they agreed. They are shipping me a replacement unit which should be here in 3 to 7 days. I seriously doubt that the replacement is going to fix anything at all. Infact, I believe that the replacement shipping is merely a stalling tactic to try to delay another week or so until they can finally get all of the bugs out of the fabled software update.  I’m not the only one with problems with the 9200. I think Bell has a major PR problem on their hands, and they had better do something to fix it quick.

As a quick recap, here’s the list of 9200 problems that are known:

Never one to shy away from voiding a warranty, I decided to take the plunge and pull apart my malfunctioning 9200 PVR to see if I could figure out if the hard drive had any sort of AAM (Advanced Acoustic Management) enabled.

Opening the case was easy enough. It consists of removing four screws holding the top cover on. The cover on my unit was a little tight, and needed some gentle persuasion. Once the cover is off, you’ll notice a small silver sticker on the hard drive bracket. This makes it impossible to remove the hard drive without breaking the sticker and voiding the warranty. Luckily, drive removal was unnecessary because I was able to remove the SATA cable and power cable from the drive, and plug in cables leading to my desktop PC.

Once hooked up to the PC, I was able to recognize the drive in the BIOS. It comes up as a ‘MAXTOR SABRE’ drive. At this point, I tried several utilities to see if I could detect and adjust any AAM setting on the drive. I tried several DOS-based utilities (the Hitachi utility is supposed to work with many manufacturers’ drives, but didn’t work in my case). The only utility I was able to make work was a utility called Doc’s AAM Utility. Unfortunately, this utility is in German, and my German is non-existent. It appears that the drive was recognized, but that AAM was not supported on the drive. As of yet, I’ve been unable to confirm or deny whether AAM is a feature of this drive.

It’s late, so I decided to put the PVR back together and call it a day. 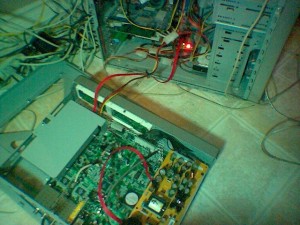 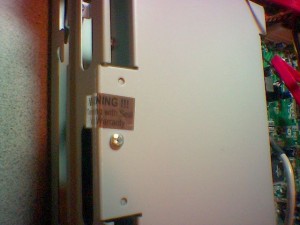 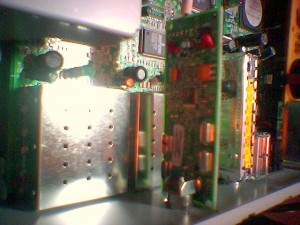 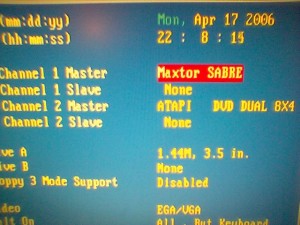 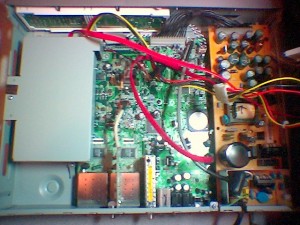 have been a PVR fan for quite some time. My first exposure was a TiVO series 1 on DirecTV, and then when Bell ExpressVu came out with their 5100, I immediately grabbed one. The difference between the 5100 and a TiVO series 1 is quite stunning – no name based recording or season’s passes. In spite of the shortcomings, I happily used the 5100 for a couple of years, until the hard drive started getting more and more flakey.

What a perfect opportunity to check out ExpressVu’s latest offering – the 9200. This beast offers HD, dual tuners, 180 hours of recording time, and name based recording! At least, that’s what all the advertising said. In reality, there’s no name based recording. After much hype advertising the feature as coming soon for the last six months or so, they have quietly dropped all mention of it on their website.

The second problem is that my unit ‘stutters’ when playing back recorded shows. Not just some of the time – it stutters about every two mintues or so continuously! It makes watching recorded shows unbearable. I thought I must have got a defective unit. I did some searching on the web to see if this was a known issue. Boy was I surprised. I found some good threads over at digitalhomecanada.com with people experiencing the exact same issue. In fact, these people had researched the problem enough to pinpoint the problem to a particular brand of hard drive.

This morning, I called Bell ExpressVu to ask them about the problems I was experiencing. After initially denying any knowledge, they conceded that there was a known problem with the software, and that a fix was going to come out to address the problem. They were unable to provide me with an estimated date for the fix, and they seemed to think that the stuttering was okay and wouldn’t affect my enjoyment of Bell ExpressVu. They were also unable to provide a delivery date for the promised name-based recording feature. I’m not happy with their explanation, and I’m not happy that I’m not able to watch recorded shows with this unit. I’ve escalated the problem to a manager (yeah, right) who will call me back within 48 hours. I’ll let you know what they say.

Discussions on the boards seem to suggest that the 9200s that exibit problems have Maxtor hard drives in them. My son suggested that perhaps Maxtor’s ‘Acoustic Management’ feature might be enabled on the drive, which would definitely affect performance, and might be the cause of the stuttering. I might just have to break down and void the warranty to pull the drive out to verify if this is actually the case. I’ll post an update if I pull it apart.

The XBox is a very nice piece of hardware. The simple addition of a modchip and large hard drive turn it into the ideal media centre. In fact, I’ve now got two of them in my house. One of them isn’t even used for games playing – purely for media playback.

It’s the media playback capabilities of software such as XBMC that make it so versatile. I use a Linux box running Azureus to acquire a large quantity of my video entertainment. It allows me to catch up on my favourite UK sitcoms and soap operas from Canada. The Linux box shares the download directory as a Samba share, and XBMC points to that share.

The missing piece is to be able to watch recorded shows from my satellite. I already own the Bell ExpressVu 5100 PVR, but it’s a sorry excuse for a PVR – it can’t record by show name, only by date an time, so it’s not much better than an old VCR! So I decided to see what MythTV could do for me.
MythTV gives me all of the functionality of a TiVo box, but without the DRM. I set up a second Linux box as my MythTV backend server. It is connected to a Bell ExpressVu 2700 receiver. I built an IR blaster using the plans found here. After fighting with lirc for a few days, I finally got it set up and changing channels on my receiver.

The front end involves using the XBMCMythTV scripts on my Xbox. These scripts are still a little rough around the edges (watching live TV is still touch and go), but it works well enough for recorded programs. There’s a problem with XBMC and MythTV at the moment. Apparently, the two projects have differing ideas about how to interpret the NUV file format standard (this is the format that MythTV uses). The scripts work fine if the video source was recorded using a MPEG2 hardware compression capture card, but doesn’t work if the video is encoded in MPEG4 (which is the case for the lower end capture cards). There are rumors of a patched mplayer.dll file for XBMC that fixes this problem, but it didn’t work for me.